After not having had any real success finding suitable replacement batteries for my old Olympus OM-1 I’ve recently been playing with an alternative: manual exposure and light measurement. So far this has been working great and, as an added benefit, has in some cases actually proven faster than going through the built-in light meter.

There are plenty of descriptions on this topic available online (see The Ultimate Exposure Computer for instance), however some contain too many details to keep around on a little piece of paper, and some seem to have been written in a post-digital era. As a result I’ve instead compiled this little table: 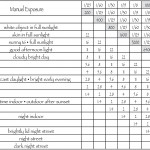 First you estimate the available light in the form of a LV number, and then you find a suitable exposure in terms of aperture and shutter speed. Since the second step can be calculated given the first, the really tricky part is picking the correct LV number (18 to 1). To do this I’ve memorised some scenes and their LV number, and when that’s not enough I use the small scene descriptions going down the two left-most columns (the free Light Meter iOS app is also very helpful for this, and so far seems to agree with both the table and my intuition).

Next I either compute the matching exposure or I look up the desired shutter speed (1/125 to 1/8) in the upper right rows corresponding to the film speed (100 to 6400); I can then go down the column to find where it intersects with the LV number, yielding the aperture needed. Most of the time I let the shutter be fixed at 1/125 and quickly adjust the exposure using just the aperture. Occasionally though, I also use the table to look up the shutter speed needed for a fixed aperture, and by following the row corresponding to the LV number I find my aperture; going straight up then gives me my shutter speed for the particular film speed.

So far this technique has worked out great, allowing me to set up the exposure without first looking through the viewfinder. And with the aperture ring right up front on the Olympus Zuiko lenses, it becomes very quick; in fact, it’s surprising that modern cameras have completely given up on this layout in exchange for dials, button, and displays.